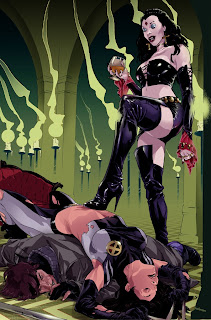 Happy Valentine's Day boys and girls! In line with the spirit of this most hated holiday, I humbly present the cover art to X-23 #6. Why? Because, really, what could be more Valentonian than a busty leather-clad vixen stepping on someone?
If you don't agree, that's okay. it just means your Valentine's Day is probably going to look a lot different from mine.
Posted by Kalman at 1:57 PM No comments: 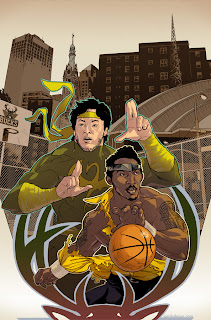 So apparently there's this thing called ESPN Magazine, and every year before basketball season they do a preview issue where they make predictions about each team in the NBA. This year, Marvel Comics handled that section and I was asked to contribute an illustration.

Key members of each team were represented by Marvel characters. My team was the Milwaukee Bucks, but if, unlike me, you know something about sports, you already knew that. You could tell just by looking at the illustration.

None of that really matters though.  Here's why: despite knowing jack and shit about sports, I really like drawing sports imagery. If you think about it, athletes and superheroes... not so different. I mean, they both wear colorful, icon encrusted costumes, both have idealised, chiseled physiques, and drawing both requires the ability to capture intense dynamic motion.

I'll try to keep these up as long as I have reference to post, and I have a lot. This one relates to yesterday's Big Head post, but in the future I'll include whatever piece of art the goofy photos in question relate to.

A note to Messrs  Paolo Rivera and Stuart Immonen, I'm not sure which one of you I saw doing this first, so props to you both.